It’s a mid-summer night here in Manila (summer here starts in March and ends in June), the 30th of April, the eve for Terry’s WP 2 theme contest deadline—and I’m taking advantage of the timezone difference. I technically have one whole evening to finish this other theme I’m hoping to enter, Kurtina. Anyway, I’m done with the second freebie theme I’ll release, so I guess it’s ok to give you guys a sneak peek 😀

There isn’t a rule in the contest that I can’t show you guys my theme entry, so I guess it’s ok. The Isla theme won’t be downloadable until Terry makes the theme entries available for download… and I’m not sure when that’ll be. I’m not trying to play hard-to-get here or anything, just thought it would be courtesy to not release this entry ahead of the others. 🙂 I’m honestly not banking on winning any awards in this contest (man, Phu Ly makes me feel like an amateur!), but there really isn’t any harm in trying, right? 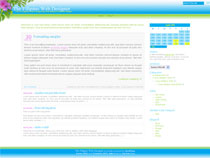 “Isla” is the Filipino term for “Island.” As I have said, it’s summer here—it’s so damn hot that you’d want to just lock yourself inside the freezer all day. I honestly want to take a vacation, and just lie around the beach with my family, fiance, and dogs (in Boracay Island to be more specific), but I just got too many things to do and leaving work for a couple of days could be suicide. Since I can’t take the Web to the beach, I just took the beach on the Web 🙂

The Isla theme is one of the first fluid layouts I’ve created ever since the invention of CSS (Are those image-text-image with blinky text and scrolling marquees of the ’90s considered fluid layouts? Hehe. I don’t know). Anyway, it’s not a thing I normally do, so I thought I’d give it a try.

I hope you guys will like it… When it’s released 😀

I’m Gail. I’ve been doing web design and development, as well as graphic design, for almost 23 years. This portfolio won’t include everything I made — it’s just not possible. What you’ll see here are my current faves.

Do you need help deciding which website package is best for you? Get a quote below!
For other inquiries, click here to send me a message.